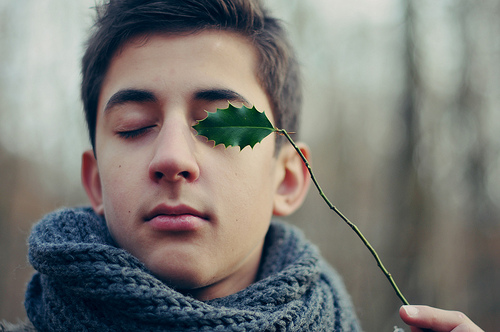 I told him it was an optical illusion – that his eyes were playing tricks on him – but he didn’t believe me. He squinted his eyes skeptically at me and replied “Well then how come when I close my eyes I see lots of different colors?”

“That’s ANOTHER kind of optical illusion,” I said. “You can see a little bit of light through your eyelids because it’s so bright in here.”

It’s really challenging to explain to a five-year-old why he can’t trust his own eyes… the same eyes that I also ask him to use on a daily basis when he’s looking for the drinking glass RIGHT IN FRONT OF HIM.

It struck me later on how much that exchange was like my conversations with God.

I say with my eyes squinted, skeptically, “God, I keep asking you for wisdom, which you promise you will give generously to anyone who asks without finding fault, all I must do is trust and not doubt. Was I supposed to go pick it up at a P.O. Box or something – because I’m not seeing the wisdom here.”

“God, it looks like everything is ‘stuck’ in my life right now. I’m looking right at this mountain – which you said my mustard seed of faith CAN MOVE – and it isn’t moving!”

That’s when God reveals that I’m just a five year old, hung up on an optical illusion:

An irrelevant timeline.
A temptation.
A fear.

Can I fix my eyes?

Dear Lord, You really caught me off guard today. I didn’t expect to find you – your truth for me – in a waiting room today. I forget that you are with me everywhere I go, even on the busy weeks where I didn’t make it a priority to spend time alone with you. Thank you for reminding me that what my five senses find isn’t all there is to life. Fix my eyes. Amen.